I want to be the very best…

Pokemon Go has been a global phenomenon that has had the internet a blaze for the  last few months .  For those who do not know Pokemon Go is an App which lets the user create an avatar, and  walk around and catch Pokemon in the real world via augmented reality using your iPhone or android camera lens . This App has been extremely popular especially with people in my age group (20-25) who grew up catching these Pokemon and collecting them via the game boy color games back in the early to mid 90’s . In the 90’s I wanted nothing more than for these Pokemon to be real , and much like the video game travel around from place to place catching rare and exotic Pokemon, and battling random trainers. And while Pokemon Go is not exactly how I  envisioned catching Pokemon it is  the closest thing, and  has amassed a giant following.

Pokemon Go benefits not only from the nostalgia factor it induces but also the social atmosphere it creates. Pokemon GO has people in parks, at malls and, in parking lots talking and communicating showing each other their Pokemon, talking about the game and its nuances, and sharing stories  about their experiences with the game. The social aspect seems to be the biggest pull for the app because people love to be apart of phenomenons, and even those who don’t like Pokemon are jumping in just to  feel  included. However beyond social success Niantic the creators of Pokemon GO have seen a huge financial success from this venture. 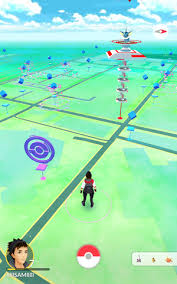 From the day the app went public Pokemon Go easily rose through the ranks to the highest grossing app  in the app store, grossing  14 million dollars in a mere 14 days . The app gives users the ability  to purchase items that they can use in the game, these items range in price from 99 cents to 99 dollars, and all of the profit Pokemon Go received came  from these micro-transactions created from users buying items to use in game . However while Pokemon Go has seen wild success the  question that the people really have is  can this success  be sustained ? Is this Pokemon Go craze just a fad or can Niantic continue to iterate on the game and provide  intriguing content for its consumer base? Although they have made  a few improvements since launch, there are still features that are missing that were promised before the game  released such as the ability to trade Pokemon with others, and the ability to battle other people’s Pokemon . Let’s just hope that Niantic can  capitalize on the Pokemon craze while it’s here and deliver on the features that they promised their fan base post launch .

Are you part of the craze?

Have you  or anyone you know played Pokemon GO? What has been your experience with it? Do you enjoy, and if so do you think you will still be utilizing the app in the coming months? Please  leave comments with your user experience below !